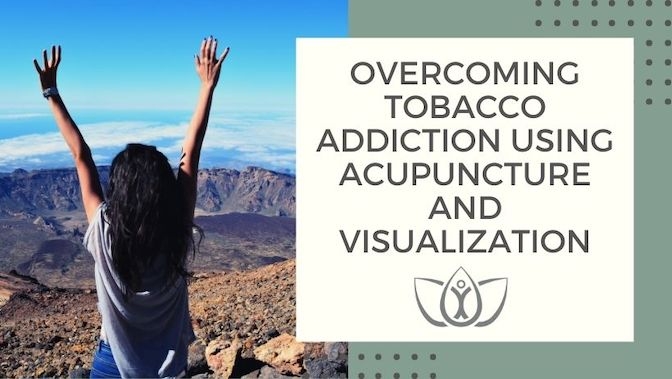 The following article was originally published in Health Keepers, a magazine created by Trinity's founder, Dr. Wendell Whitman. This article appeared in Volume 1 • Issue 2 • Spring 1998, pg 14-16. This article originally titled, "How I Overcame My Tobacco Addiction Using Accupuncture and Visualization"  and was written by Stephen C. Byrnes, Ph.D., D.N.T., C.N.C.

Nine must be my lucky number. It took me nine times to quit smoking and on my ninth try, I was bound and determined to succeed. And succeed I did. It has now been over 17 months since I took my last drag of a cigarette, so I think it’s safe to say I’m home free. I look back at the 18 years I spent smoking and always wonder, “Why?”

I began smoking when I was 15 years old. Except for my brother who was in the army, no one in my family smoked. My father was a former Olympic track and field coach and head of the high school cross country team in our city; he absolutely despised smoking. My mother did not smoke either. Our relatives, however, were another matter altogether as several of them smoked. Under the guise of appearing “adult” and “grown-up,” I bought my first pack of cigarettes.

Eventually, my father found out and promptly banned me from the house when I smoked. “If you want to kill yourself, do it outside!” This tyrannical tirade was then followed by an impassioned, almost tearful plea, “Stephen, why are you doing this? Don’t you know what happened to my father?”

I did. Grandpa Byrnes began smoking in the ‘20s when no one knew it was harmful. My grandfather was a talented, funny and handsome salesman who always had a cigarette in his mouth. He died of throat cancer at the age of 58, one year before I was born. Unfortunately, his early death did not phase me much. Even when my mom’s smoking sister died of lung cancer a few years later at age 52, I was not motivated to quit. Like most smokers I thought, “It won’t happen to me.”

For the first few years I smoked very little, maybe 5-6 cigarettes a day. At one point, I quit. Lean financial times forced me to give it up. But when things turned around, I started up again. Slowly but surely, my 5 cigarette-a-day habit grew into a 40 cigarette-a-day one. By the time I quit, I was smoking $5.00 a day.

When I was 33, I helped a friend overcome a serious illness using various nutritional and herbal methods. The experience had such a profound impact on me that I decided to go back to school and get advanced degrees in nutrition and natural therapies. Believe it or not, I was still smoking when I began my studies! The incongruity of it all, however, began to weigh on my mind: “What am I doing?!? How can I help people overcome disease when I’m doing something which causes it? What kind of example will I be to my future clients?” I realized I had to quit, but I did not have enough motivation yet.

The motivation came. For the past two years, I’d been having episodes when I would begin gasping and gulping for air. These episodes did not happen often, but when they did occur, it was scary. I felt like I was drowning. This was, I learned later, one of the first signs of emphysema. Additionally, I was getting my once a year bout with bronchitis twice a year. On top of this, I had no energy. I’d look at myself sometimes and think, “For Heaven’s sake! I’m only 33 and I have virtually no stamina!”

Something all addicted people do, no matter what their addiction, is rationalize. Rather than face their inner demons, they explain away their behavior to make it acceptable to them and others. My ultimate rationalization came, ironically, from my new studies in health. I quickly learned that there were several nutrients which could help reduce the harmful, carcinogenic effects of tobacco (beta carotene, vitamins A, C and E, and others). Instead of quitting, then, I simply bought these supplements and began taking them. The supplements were my excuse to keep smoking for I figured that, since I was taking them, the toxins were not hurting my body and I was, somehow, protected against cancer!

But something inside of me would not allow me to rationalize anymore. While at the laundromat one Saturday, I picked up a Reader’s Digest to browse through while I waited for the wash to finish. One of the feature articles of that issue was “If Only I Hadn’t Smoked.” I read it. Horrible stories about several people whose lives were destroyed by their addiction to tobacco. Lung cancer, emphysema, heart attack, and worse. Rather than try to rationalize again, I resigned myself to the inevitable: I must quit.

But how? I’d tried several times before and failed. Since I’d been studying natural therapies, however, I’d read about acupuncture and its effectiveness at treating drug withdrawal. I knew of an acupuncturist and called her up. I went for a series of treatments.

This was my first experience with “being poked,” and I was excited at being able to try something new. The acupuncturist, Suzanne, advised me to come back for three additional treatments for three consecutive weeks. While the needles stung a bit going in, they did not hurt. She explained, “The points I’m stimulating are not just addiction points to deal with your cravings, but ones which are strained by smoking. I’m doing this to help your body heal itself of the damage that’s been done to it.” Suzanne then explained that she had placed needles at various points on my body, especially my ear, to affect my liver, lungs, brain, and digestive system. “Cleansing the liver is especially important as this organ filters all of the toxins from the blood.” Indeed, when she placed the needle on my foot at the liver point, I almost jumped off the table because it was so sensitive. “That tells me your liver qi, or energy, is weak.” Suzanne kept the needles in for about 20 minutes, heating some of them with a burning herb bunch. Again, the procedure did not hurt. It was, in fact, quite relaxing and I dozed off for a few minutes.

After the session was over, I made some rules for myself: if I happened to smoke after this, it would always be outside. That meant no smoking in the car, the house or anywhere which was inside. This, combined with the acupuncture treatment, enabled me to go from 40 cigarettes-a-day to just 8 overnight! It was unbelievable, but I did not have any withdrawal symptoms. Despite this, however, and completing the remaining treatments, I was still smoking. Nevertheless, I knew I was getting closer to my goal of ceasing entirely.

But in May of 1995, something changed and the last straw broke my habit. I got bronchitis and sinusitis at the same time. Each time I had a cigarette, I would begin coughing a deep, barking cough which resonated through my chest and caused considerable pain. No problem, my rationalizing mind mused, I’ll just take more garlic and vitamin C with bioflavonoids to get well. But it did not work. As I was smoking and coughing on a break at work, I suddenly realized how utterly stupid I looked. I also realized the truth: I was an addict. When I got back to my desk, I called Suzanne and told her that I’d absolutely had it and needed to make an appointment because I knew I couldn’t do this alone. She saw me right away.

As I sat outside her office, I smoked my last cigarette. I was apprehensive about the step I was taking, but determined. “No matter what, I will not smoke. From this day on, I am a nonsmoker.”

The next two weeks were difficult to say the least. Despite the effectiveness of the treatment, I still had cravings which would almost overwhelm me at times; nicotine is a very powerful drug. After three days, I knew the nicotine was out of my system (it takes only 72 hours for the body to lose its addiction to nicotine), but now I had to retrain my mind which had grown accustomed to smoking. Every spare moment I had in my apartment, I filled up with time. I went for a walk. I rode my bike to the beach. I went swimming. For each day which went by with no smoking, I thanked God. I reasoned that if I went back now, all the hardship I’d gone through up till then would have been for nothing.

I eliminated all of the mental triggers to smoke: no coffee, no tea, no sitting around after eating a meal. I took a homeopathic preparation for tobacco withdrawal. I took herbs like chamomile and skullcap to relax myself. I constantly visualized myself NOT smoking and flying high in the sky, inhaling air into even cleaner lungs. Each time I visualized this image, in bright, beautiful colors, I would see myself smiling and saying with pride, “I’m free!”

And free I am to this day. Incredibly, it took almost a year for the desire to go away completely. True, the major addiction was gone in about three weeks, but the last process of overcoming an addiction, extinction, takes longer. At odd times I’d find myself thinking about smoking which I quickly dismissed without much effort. With the money I save from not smoking (+$1800 a year!), I take a nice vacation.