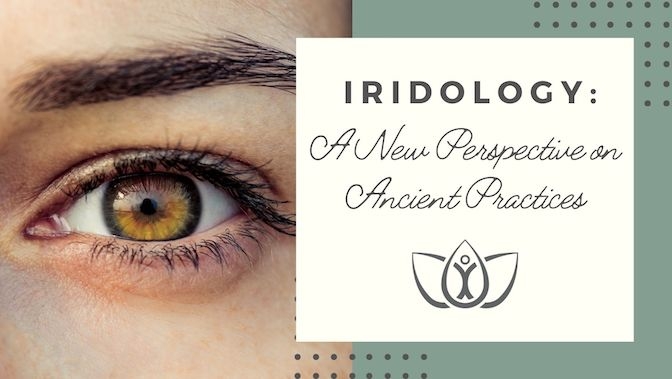 Most people who are involved in the natural approaches to health care have heard of or have experienced some form of iridology (pronounced eye-ri-dology not ear-ri-dology). The iris, a relatively circular, pigmented membrane that surrounds the pupil, is the most complex external structure of the human anatomy. It is connected to every organ and tissue of the body by way of the nervous system. Through the optic nerves, which are attached to the eyes, vision information is sent to the brain. At the same time, through a reflex circuit, information is sent back to the eyes from the brain about genetic heredity and accumulations within the organs, glands, and other tissue structures of the body. The iris reveals the level of constitutional strength, inherent weaknesses, and the transitions that take place in people’s organs and tissues according to the way they eat, drink, feel, think, and live.

The practice of iridology dates back, in recorded history, to approximately 1,000 BC to a land in Central Asia known as Chaldea. The Chaldeans were a Semitic tribe of Amorite-Arabian origin who lived on the Western shores of the Persian Gulf. Ruins inscribed for the iris nearly 3,000 years ago were found on stone plates in this part of the world.

It is thought that the Chinese and Japanese civilizations, prior to the Chaldeans, also had an awareness of looking at the whole apparatus of the eye to discern health/disease conditions of organs.

Many people think that the person who discovered and created the practice of iridology is Hungarian physician Dr. Ignaz von Péczely (1826-1911). At the age of eleven, Ignaz was attempting to free an owl trapped in his garden when one of the owl’s legs was accidentally broken. As the anecdotal story goes, Ignaz observed a dark line forming in the lower portion of the owl’s iris. He nursed the bird back to health and noticed that white crooked lines had replaced the dark line over the next several years. He was intrigued by this phenomenon. Thirty years later in 1867, at the age of 41, he earned his Doctor of Medicine degree from the medical college in Vienna, Austria. Dr. von Péczely made significant contributions to the advancement of iridology throughout his career. He is thought of as the modern day or renaissance father of Western iridology. He published a book in 1881 entitled, “Discovery in Natural History and Medical Science, a Guide to the Study and Diagnosis from the Eye”. This book achieved an international renown and stimulated interest in this science, especially in Germany. However, he did not discover this iris reflex of tissue health conditions. It is a common misconception that he did discover this phenomenon.

In the Bible St. Luke writes, “The lamp of your body is the eye. When your eyes are sound, you have light for your whole body, but when the eyes are bad, you are in darkness. See to it then that the light you have is not darkness. If you have light for your whole body with no trace of darkness, it will be as bright as when a lamp shines its rays upon you” (Luke 11, 34-36). Of course, this wording will vary somewhat depending on the Bible version being referenced.

In the year 1670, in Dresden, Germany, the physician Philippus Meyens, in his book, “Chiromatica Medica”, described the organ division of the iris according to body regions. The Viennese ophthalmologist, Beer, did not know of these old views on iris analysis. Yet, in his publication of 1813, “Textbook of Eye Diseases”, he wrote, “Everything that affects the organism of the individual cannot remain without effect on the eye and vice versa.”

There are several more pioneers of the late 19th century that could be mentioned here; however, the intent of this article is not to be an exhaustive historical treatise.

At the dawn of the 20th century, an Austrian-born medical doctor by the name of Henry Edward Lahn (also known as Lane) was credited with bringing iridology to North America from Europe. He wrote the first iridology text in the English language entitled, “Diagnosis from the Eye”, which was published in 1904, in Chicago, Illinois, and London, England.

During the first half of the 1900’s most of the contributors to this evolving science and practice were nature cure medical doctors. J. Haskel Kritzer, M.D., Frederick W. Collins, M.D. and Henry Lindlahr, M.D. were three such pioneers of their era. Dr. Lindlahr writes in his book, “Iridiagnosis And Other Diagnostic Methods” (1919), “The regular school of medicine, as a body, has ignored and will ignore this science, because it discloses the fallacy of their favorite theories and practices and because it reveals unmistakably the direful results of chronic drug poisoning and ill advised operations.”

By the mid-1900s, iridology had been significantly suppressed by the big business industry of allopathic medicine. It was, however, kept alive by the dedication and passion of natural therapy doctors such as the late Bernard Jensen, D.C., N.D. and John R. Christopher, N.D. Noteworthy European contemporaries of these men were two German heilpraktikers, Josef Deck and Josef Angerer. Again, there are many more men and women who also made contributions who are not mentioned here.

Dr. Jensen stands out as the single most significant American figure in the second half of the last century. He was a student of the aforementioned Lahn, Collins, Kritzer, and Lindlahr, among others. Much of his iridology terminology came from these mentors.

Today in the 21st century, the science and practice of iridology has evolved into much more than just determining physical conditions and predispositions through the iris. Research and observation have been done that reveals thought and emotional factors as well as conscious and subconscious patterns of behavior, influenced by cellular genetic memory, are revealed through the external ocular structure.

Over the years of clinical practice, I have come to a conclusion, which led me to create the following statement in 1988: “The iris sclera and pupil of the eye show the veil the soul has created, through consciousness (or forgetfulness), that reflects the illusion which prepares the soul for attaining the reality of full enlightenment.” What this simply means is that we are spiritual beings having a human experience.

I found with personal experience and belief in my own life that all healing begins on the spiritual level first, then into the mental/thought aspect, from there into the emotional/feeling level, and finally into the physical body. This is the true nature of the healing process.

Part of my professional education led me to become a psychologist and psychotherapist. My interest in the thought and emotional possibilities that the eyes may reveal was stimulated when I studied with Robert T. Stevens. He was a student of the late John W. Ray, N.D. I have been fortunate to have studied the works of all the aforementioned iridologists dating back to Dr. von Péczely.

I later developed a new system called Holistic Iridology® which encompasses the whole person. All the organs, glands, and structures of the body have specific thought and emotional correlations to them. These correlations also pertain to constitutional typing by iris color, trabeculae structure, and accumulations that build up over time. By helping individuals to help themselves to understand their tendencies better and in a deeper way, they may improve their health on all levels, thus reducing the potential for dis-ease and disease.

It is important to emphasize the following at this point: Iridology is not used for diagnosis. Rather, it is used as a means of assessment for conditions and levels of health. This means, approach the assessment of the client from a positive perspective and avoid the use of medical terms. Leave the diagnosing to those people who have a license in a particular field of practice. Those people who attempt to diagnose with iris analysis, and are not legally qualified to do so, hurt not only themselves but also the credibility of iridology in general. Unfortunately, this has happened far too often over the past 20 years here in the United States.

The scope of iris analysis has been expanded with the integration of the spiritual, mental, and emotional aspects. Along with these developments comes the advancement of the iris topography through the Chart of Holistic Iridology®. Dr. Jensen’s chart was copyrighted in 1948 and has been virtually unchanged. Josef Deck’s chart was copyrighted in 1954 and has had a few recent modifications done by two of his advanced students and highly qualified practitioners, Rudolph Stolz, Hp. and Willy Hauser, Hp. of Germany. The new Chart of Holistic Iridology® will enable the practitioner to more accurately interpret the iris for organ and gland location. There are also new brain flair terms that describe what these areas reveal.

Iridology as a science and practice still deserves much more recognition and credibility within the healthcare field. Along with this, we have a responsibility to advance this science through proper research and ethical practice. At the same time, it is important to preserve the heritage of iridology and to recognize the contributions of those pioneers who have come before us. As in the words of Sir Isaac Newton, “If I have seen further it is by standing on the shoulders of giants.”

NOTE: This article was edited to adhere to current legal and practical standards.