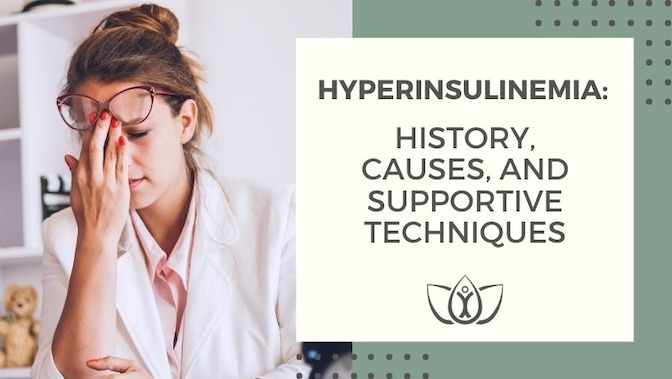 The following article was originally published in Health Keepers, a magazine created by Trinity's founder, Dr. Wendell Whitman. This article appeared in Volume 2 • Issue 2 • Summer 1999, pg 26-27. This article originally titled, "Hyperinsulinumia- Why is it so deadly?" was written by Victoria Pate.

DISCLAIMER: This blog post is not intended as medical advice. Its intent is solely informational and educational. Please consult a health professional should the need for one be indicated.

Something insidious is happening to America’s health. Most don’t realize it, much less know how to stop it. This condition causes reduced quality of life, needless illness, even death. Hyperinsulinemia is its name, and it is preventable.

Hyperinsulinemia was first described in the medical literature in 1924 by Dr. Seale Harris, Professor of Medicine at the University of Alabama, one year after injectable insulin became available. Symptoms of hyperinsulinemia noted were hunger, weakness, fatigue, anxiety, nervousness, crying spells, trembling, confusion, disorientation, delirium, and stupor. Dr. Harris maintained that hyperinsulinemia resulted from an excessive secretion of insulin which then caused low blood sugar leading to intense hunger. To diagnose the condition, Dr. Harris devised a modification of the Glucose Tolerance Test used in testing diabetics. During testing, patients with hyperinsulinemia showed abnormal drops of blood sugar concentration. Harris called hyperinsulinemia the “hunger disease” in conjunction with others who called it “chronic fatigue.” He treated his patients by having them eliminate sugar from their diet. Remember, this was way back in 1924.

Research from 1924 through the early 1960s proved that hyperinsulinemia was a causative factor in allergies, asthma, obesity, peptic ulcers, depression, alcoholism, and carbohydrate addiction. Insulin resistance, glucose intolerance, and decreased insulin sensitivity—terms describing the different faces of hyperinsulinemia—were brought to the medical profession’s attention by Dr. Gerald Reaven, Professor Emeritus of Medicine at Stanford Medical School. He was the first to describe what is called Metabolic Syndrome or Syndrome X in 1988. Syndrome X is a cluster of cardiovascular risk factors—hypertension, glucose intolerance, dyslipidemia, obesity, diabetes, and accelerated atherosclerosis—the underlying cause being insulin resistance/hyperinsulinemia. In children as well as adults, hyperinsulinemia causes cardiovascular disease, obesity, Type II Diabetes, and cancer, and has been linked to ADHD, food allergies, learning and behavior problems, and juvenile delinquency. Other deleterious effects of hyperinsulinemia are increased rates of infertility, polycystic ovarian syndrome (PCOS), and hormonal imbalances in women. If all that were not enough, hyperinsulinemia also accelerates the aging process.

“An increased risk for many of this country’s top killer diseases and health risk factors, including undesirable blood pressure and blood fat levels, heart disease and circulation problems, stroke and adult-onset diabetes [Type II Diabetes] all appear to have their origins in childhood and adolescence and emerge in early or middle adulthood as a result of an often-undiagnosed insulin imbalance.”

Experiments in 1930 showed that hyperinsulinemia (too much insulin) suppresses growth hormone (GH). However, the implications of this knowledge have only been recognized within the last 10 years with startling ramifications for old and young alike. Until the late 1980s, scientists thought that GH was needed only by growing children. We now know that GH is needed in high levels throughout life for continuous production of healthy cells, organs, and immune system, thereby creating a strong body, a sound mind, and increased longevity.

Growth hormone not only directs the body to regenerate from the cellular level on up, it is responsible for maintaining homeostasis among all the biochemical processes—so crucial to the body’s ability to deal with internal and external stress. Lacking homeostasis, our bodies deteriorate in an ever accelerated rate resulting in illness, disease, and premature death. Understanding the importance of growth hormone’s role in cellular regeneration and health is one of this century’s most important discoveries.

Hyperinsulinemia is caused by what we eat—the high complex carbohydrate/ low protein/low fat diet that has been popular for the last forty years. Complex carbohydrates break down in the body into simple sugars which is no different to the body than eating a candy bar or drinking a soft drink. The consequent high insulin levels act like an elephant sitting on the hypothalamus and pituitary glands, preventing them from secreting growth hormone at a level that allows the body to create and sustain health—at any age. Fortunately, when growth hormone is present in healthy levels, it in turn keeps insulin and blood sugar balanced. Preventing hyperinsulinemia, and the resulting suppression of growth hormone, should be a major goal for people of all ages.

Ladies and gentlemen, and especially parents, take note: the high protein, low carbohydrate diet that keeps insulin properly balanced is the same diet that allows the body to make and secrete healthy levels of life promoting growth hormone. By eating plentiful amounts of protein, insulin-balancing vegetables, and limited fruits, our hyperinsulinemic elephant will vanish, growth hormone levels will rise and the body can begin to repair and heal itself.

Hyperinsulinemia and I are companions of long standing. For many years I have been seriously ill with Chronic Fatigue Immune Dysfunction Syndrome (CFIDS), Environmental Illness (EI), Fibromyalgia, food allergies, fuzzy headedness, hormone imbalances, and sleep disorders. In addition, I craved sweets, was chronically hungry, had weight problems, and—you guessed it—I was eating mainly complex carbohydrates with minimal protein. Two years ago, I learned about hyperinsulinemia and began eating a high protein, low carbohydrate diet and slowly began to get better.

My healing accelerated dramatically when I added Symbiotropin, a nutraceutical, to my regimen. Symbiotropin, made from food sources, contains unique polysaccharides that bring insulin and blood sugar into balance, and secretagogues which safely encourage the hypothalamus and pituitary to make and secrete growth hormone in such a way that prevents over-stimulation of the glands. Altering my diet and taking Symbiotropin has allowed me to begin to regain my health for the first time in my adult life.

An insulin-balancing diet and Symbiotropin make a dynamite team, producing a powerful physiological framework which defeats hyperinsulinemia at its deadly game.