Call an Enrollment Specialist today
Chat Now!
The Father of American Herbology
BACK 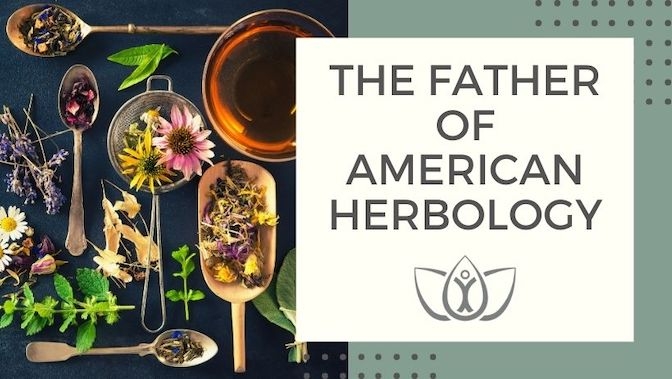 The Father of American Herbology

The following article was originally published in Health Keepers, a magazine created by Trinity's founder, Dr. Wendell Whitman. This article appeared in Volume 1 • Issue 2 • Spring 1998, pg 9-10 & 25. This article originally titled, "The Father of American Herbology"  was written by Steven Horne.

The setting is rural New Hampshire in the early 1800s. The two-year-old daughter of an uneducated farmer is deathly ill. Discharges are coming from her mouth, nose and eyes. She has lapsed into a coma and is breathing with great difficulty. The local doctor says there is nothing more he can do.

As the father watches hopelessly, he is seized by a sudden flash of intuition. He fills a bath with boiling water and holds his daughter over the steam. After about 20 minutes, she relaxes and begins to breathe normally. It is the turning point.The child recovers, but the death blow to a farmer’s faith in orthodox medicine has been delivered. From this time forth whenever a member of his family is ill, he treats them with steam baths and herbs. His methods are so successful that soon neighbors and friends are calling on him to tend their sick.

Thus began one of the most unusual and influential medical careers in American history—the career of Samuel Thomson. This article will endeavor to show why the title “The Father of American Herbalism” rightfully belongs to Samuel Thomson. As naturopathic physician and author, Stan Malstrom has stated, “Samuel Thomson has probably contributed more to the science of herbology than any other individual in the history of the United States.” Without any formal medical training, he devised a system of healing that not only swept frontier America like a storm, it crossed the oceans to kindle a new botanical movement in Europe (particularly England) as well. In fact, it is estimated that by 1840, three to five million Americans had adopted the Thomsonian method of treating illness. The success of the Thomsonian movement opened the door for the eclectic physicians, the homeopaths, the naturopaths and many other innovations in health care.

It was at the tender age of four that Thomson discovered one of the herbs that was to be the hallmark of his herbal system. The plant was lobelia (Lobelia inflata) , an emetic herb, also known as Indian tobacco or puke weed. Some twenty years later, Thomson had an experience which convinced him that this herb was a valuable medicine. While working in a field, he found some of the plant and gave a sprig to a co-worker. The man ate it. A short time later he said he believed what Thomson had given him was going to kill him, because he’d never felt so bad in his life. The man then vomited several times and Thomson led him to the house to rest. In his biography, Thomson records that the experience seemed to do the man a great deal of good:

...in about two hours he ate a very hearty dinner, and in the afternoon was able to do a good half day’s labor. He afterwards told me that he never had any thing do him so much good in his life; his appetite was remarkably good, and he felt better than he had for a long time. This circumstance gave me the first idea of the medical virtues of this valuable plant, which I have since found by forty years experience, in which time I have made use of it in every disease I have met with, to great advantage, that it is a discovery of the greatest importance.

Eventually, lobelia became the “number one” herb in Thomson’s materia medica and its use stirred a controversy which continues to the present day. As more and more people came to Thomson for help, orthodox physicians began to harass him. They charged that lobelia was a deadly poison, while Thomson claimed it was beneficial and harmless. The irony of these charges is that orthodox physicians were administering doses of mercury, arsenic, strychnine, antimony, saltpeter, opium and other deadly poisonous materials.

Had his successes not aroused the jealousies of local M.D.’s, Thomson might have remained an obscure “root doctor.” But legal actions against him and the realization that he couldn’t single-handedly treat all the patients who needed his services caused him to consider his future carefully. He settled upon an ingenious answer to these problems. In 1813, he visited the United States Patent Office and secured a patent on “Thomson’s Improved System of Botanic Practice of Medicine.”

Armed with this patent on his herb formulas and methods, he appointed agents to publicize and promote his work. “Family Rights” to use the Thomsonian medicines and system were sold for $20. Right-holders were able to purchase Thomson’s herbs and formulas, which he distributed from a central warehouse, and a copy of Thomson’s book, New Guide to Health or Botanic Family Physician. They were also organized into Friendly Botanical Societies. These societies loudly proclaimed Thomson’s belief that “every man could and ought to be his own doctor - intelligently responsible for his own health.” By 1840, a hundred thousand patent rights had been sold throughout the nation. Thomsonian medicine was also introduced to England by Albert Isaiah Coffin, where it enjoyed similar success.

Medical historians have attributed it to a number of things. They say it was because people were frightened or discouraged by the failures of medical orthodoxy. They claim it was also part of the spirit of the times—the time of westward expansion and rugged individualism. Thomsonian medicine fit that model exactly because Thomson believed that every man or woman could be a doctor to his or her own family through his system. Thousands of Americans were opposed to “king-craft, or priest-craft, lawyer-craft and doctor-craft.”

While all of these factors and more contributed to the success of botanical medicine, the medically-oriented historians have overlooked one important point-Thomsonian medicine was successful because it worked! This author and many others have personally tried the full course of Thomsonian treatment with excellent success. Three to five million people adopted the Thomsonian system over a thirty year period because they found it worked consistently in cases where orthodox medicine failed. Keep in mind that the population of the United States in 1830 was about 13 million people, so we are talking about 30% of the population. Also remember that this system was not “forced” onto the people by legislative monopoly, but was accepted on its own merits.

Thomsonians weren’t interested in obtaining a legal monopoly on the medical profession. In fact, they wanted just the opposite. Thomson and his followers believed that “the people are certainly capable of judging for themselves, whether what is done for them, removes their complaint or increases it.” So supporters of this “grass-roots” health movement aligned themselves with the Jeffersonian democrats, who considered all monopolies to be undemocratic and improper in a free society. They helped form a powerful political movement known as the Popular Health Movement and were amazingly successful in their efforts. By 1850, they had wiped the medical licensing laws off the books in every state. As the Story of Medicine in America noted, Thomson “demonstrated to the satisfaction of many that the capacity of Americans to survive between 1630 and 1760 without a medical profession had not been an accident, that a separate class of medical men was a luxury incompatible with sound reasoning or democratic practice.”

Thomson’s influence extended far beyond his own day. His system may have helped pioneers coming to the Rocky Mountains survive their harsh wilderness experience. Many pioneer physicians used Thomsonian herbs and therapies and their journals record that they achieved the same excellent results he did.

The repeal of licensing laws and Thomson’s success with a patented medical system, helped usher in the era of patent medicine. Although most history books portray this as a dark period in American medicine, this is not necessarily so, as Dr. Andrew Weil points out in Health and Healing:

It was a time of great experimentation in matters of health. There was a trend toward self-responsibility, summed up in the slogan “Every man his own doctor.”...Resentment of regular doctors ran high, and with justification. Not only did they bleed and purge people to death, they tried to put out of business competitors who attempted to heal the sick with gentler methods.

The botanical movement continued to grow after Thomson’s death in 1843, but it became more and more divided. While he was alive, Thomson strongly resisted the creation of a special class of “healers.” Thomson felt that every family ought to have its own doctor. He felt that the right to this knowledge belonged to every man and not to a special class of men. However, there were those who pressured Thomson and wanted him to create a school to train doctors in his system.

Those following after Thomson did exactly what Thomson had resisted. They formed schools. These physicians, known as neo-Thomsonians or the Physio-Medical doctors, began to abandon the systematic approach advocated by Thomson in favor of the diagnostic and prescriptive approach used by orthodox medicine. They became quite sophisticated in their practice, but were economically and politically overshadowed by the changes in orthodox medicine.

Thomson’s influence is still with us today. The herbs Thomson discovered or popularized include many of the most popular Western herbs sold today—cayenne pepper or capsicum, lobelia, goldenseal, bayberry rootbark, myrrh gum and red raspberry leaves. Many of today’s popular herb books use a neo-Thomsonian approach. Back to Eden is one of these. The author, Jethro Kloss, emphasizes Thomsonian herbs and therapies, including the lobelia emetic, capsicum and goldenseal.

Furthermore, the resurgent interest in herbs in recent years is at least indirectly due to the influence of Thomson. John R. Christopher, one of the key figures in the herbal renaissance of today, was strongly influenced by the journal of Priddy Meeks. Meeks was a Utah pioneer who had purchased Family Rights to the Thomsonian System. His journal describes Thomsonian methods and herbs. As a result, Dr. Christopher’s theories and methods, as well as the herbs he learned to use, strongly parallel Thomsonian medicine. His herb formulas, most of which contain cayenne and/or lobelia, are sold by at least five of the largest herb manufacturers in the United States.

The story of Thomson’s career has many modern parallels. Most of the herbalists I have met, started out just as Thomson did. They never intended to become herbalists. When they obtained no relief from modern medicine, they began searching for alternatives. They found they could succeed with herbs where orthodox medicine had failed and before long, they were helping family and friends. Before they even realized what was happening, they were practicing herbology either full or part-time.

Just as people of the early 1800s were dissatisfied with the ineffectiveness of orthodox treatment for acute and contagious disease, people of today are largely dissatisfied with orthodox treatment of chronic and degenerative diseases. And, just as Thomson offered an attractive and apparently effective alternative, herbalists and natural healers of today are succeeding where orthodox medicine is failing.